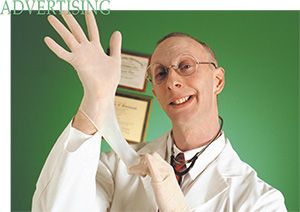 “Yes, doctor, we’ve successfully developed a treatment method that cures 70 percent of patients within 6 months. Our plan now is to abandon the current course of treatment and develop a completely new one to see if we can accomplish a higher cure rate.”

Sounds ridiculous, but that’s the exact tactic some advertisers take when reviewing their branding strategy.

Bottom line: When you’re lucky enough to have an ad campaign that’s working, it can be reckless to change. But in the world of advertising, it happens for all kinds of reasons.

Although many a time it’s well worth retiring established campaigns that have lost their zing, too often current (and very successful) ad campaigns are offered up as the sacrificial lamb when companies hit a rough patch. Or when new management feels compelled to put a personal mark on advertising. Or simply when boredom sets in. Or worse yet, when sound campaigns fall victim to the siren song of cultural trends. The result—great ideas get grounded and the campaign loses the continuity it needs to succeed.

In the early 1990s, Kentucky Fried Chicken got sidetracked with the emerging healthy food trend. They promptly abandoned their 11 herbs and spices and finger-lickinggood heritage and shortened their name to KFC, hoping that folks would forget that they sold fried foods. The new KFC introduced rotisserie chicken and went so far as to claim their food was a healthy fast food alternative (a claim the Federal Trade Commission had issue with).

With the proper tender loving care, great slogans, ad icons, and campaign themes can move beyond mere advertising and become hallmarks of the product brand. In 1947, Frances Gerety, a copywriter for N.W. Ayer, penned for De Beers what Advertising Age proclaimed as the most recognized and effective slogan. Nearly 60 years later, “A Diamond Is Forever” is still being used to convince prospective grooms to spend a month’s salary on an engagement ring for the woman of their dreams. Just as a diamond is slowly forged over time, De Beers has stayed true to this core message, augmenting it with new concepts like the anniversary ring.

In some cases, well-loved advertising classics are making a comeback, thanks to wistful consumers longing for the security and comfort of the past as well as brand managers hoping to tap the equity of memorable campaigns.

In the spring of this year, the Wm. Wrigley Jr. Company brought back the perky Doublemint Twins, who originated during the ’60s, to promote its chewing gum product. The new ads showcase a set of young, blond female twins pedaling their way through today’s hectic world singing, "Whatever happened to simple fun?" Wrigley hopes to capitalize on consumers’ fond memories of the original twins and to connect to the wish for simpler times.

“Got the urge?” Most people didn’t when Burger King launched yet another faltering campaign to sell burgers. The fast food chain’s marketing efforts had suffered through 9 CEO changes in 15 years and 4 ad agencies in 4 years.

Things were on a downward trend—with customer traffic off 22 percent—until their latest agency decided to resurrect the Burger King. The chain’s ads now feature a mega-headed version of the King promoting their breakfast sandwiches and other food fare. The King’s efforts have brought prosperity to the land through increased sales.

Now that you’ve witnessed some dos and don’ts, put your own advertising strategy to the test below:

If you answered yes to any one of these questions, you may want to carefully re-examine your advertising program before you begin making wholesale changes.

Anne Aufiero, (aufiero@adability.com or www.adability.com) is the president of AdAbility, Inc., a full service advertising agency. She also coaches emerging entrepreneurs in marketing and advertising issues through Pennsylvania’s Self- Employment Assistance program.